How is it that the Antwerp Gipsy-Ska Orkestra has left a trail of scorched stages, dumbfounded purists and crowds which have been whipped into a frenzy across Europe, from the south to the Balkans? Possibly because these formerly illegal globetrotters pimp their clash of sizzling hot gipsy and fast ska with trashy horns and fat beats? Their second album I Lumia Mo Kher – Serbian Romani for: The World Is My House – is teeming with energy, ambition and an appetite for life. Gipsy-ska never sounded this original and dazzling before!

I Lumia Mo Kher marks the new course that the Antwerp Gipsy-Ska Orkestra has charted for itself. Guitar player Mukti Gabriels explains: “After a few years of testing the waters and experimenting we have now found our sound”. “Our debut, Tuttilegal (2007) sounded rather acoustic and introverted. DJs really couldn’t do much with it at the time. The new album is more dynamic and the Balkan beats, loops and samples are more apparent.”

But Tuttilegal (2007) did not exactly go unnoticed. The album entered the German Radio College charts on 2 – between Oasis and Metallica! – with rave reviews for the group and performances throughout Europe. The Antwerp Gipsy-Ska Orkestra became a favourite festival act in no time at all.

The genesis of this collective explains the unusual crossover of styles. Originally the Antwerp Gipsy-Ska Orkestra was an intercontinental family, with roots in Belgium, Serbia, Chile and Argentina. Its members were or are active in numerous other configurations, including Ambrassband, Donkey Diesel, Murga Armada, Gregor Terror & The Calypso Gigolos, Nathan Daems Quintet, Laïs, Belgian Asociality and Think Of One.

“Before this Mukti and I played in a ska-punk band”, says singer Gregor Engelen. “After that fell apart I discovered gipsy music through Emir Kusturica’s films. So I decided to start experimenting with the combination of gipsy and ska and this sound, which is continuously evolving, was the outcome. Although we do call ourselves the Antwerp Gipsy-Ska Orkestra our music also draws on drum ‘n bass, samba and dubstep. You need to constantly think of new angles to be original in the Balkan beats world.”

But the Antwerp Gipsy-Ska Orkestra prides itself on being a real live group. “Even if you take away all the electronics the sound is still there. And anyway, not all our songs sound electronic”, Mukti hastens to add. He is proud that I Lumia Mo Kher includes some contributions by a number of renowned gipsy musicians. No artificial collaborations, but the inevitable consequences of warm backstage friendships.

“We know these musicians personally”, Gregor emphasizes. “Kočani Orkestar from Macedonia joined us on Roma Project. Marko Markovic, the son of Serbian trumpet player, Boban Markovic played on Bašalaja. The technique of these guys is unbelievable. Miles Davis once said about Markovic: ‘I didn’t know you could play the trumpet like this’. The day after his gig in Antwerp Marko Markovic joined us in the studio. He is one of those young guys who digs what we are doing with gipsy music. Instead of their traditional music they also want to play innovative stuff like we do. Gipsy music is dance music.”

“You don’t like gipsy‐reggae?
I will shed no tears
Go listen to Britney Spears”

The Antwerp Gipsy-Ska Orkestra’s approach is adventurous, unique and groundbreaking. “I don’t think we need to be too modest about it”, says Mukti. “Everyone thinks that every possible cross-pollination has already been tried and tested but we think that we are really pioneers in this genre, who are doing something different and new with this style.”

Gregor likes to illustrate his point with Roma Project. “This is Romany gipsy-hiphop inspired by Gipsy.cz, the group which represented the Czech Republic at the Eurovision Song Contest. So we started thinking about making a gipsy song with a hiphop beat. The Kočani Orkestar’s musicians played the rhythms with their baritone tubas. Real crossover, in other words. The audience goes crazy every time we play it live.”

Is the Antwerp Gipsy-Ska Orkestra venturing on thin ice with this crossover? So what? The future belongs to the brave. The group has even ventured into the lion’s den thanks to its solid live reputation. In last few years the Antwerp Gipsy-Ska Orkestra was even invited to the International Romani Art Festival in Romania. At the prestigious Sziget Festival in Budapest the group whipped the Roma tent into a frenzy as the only non-Eastern European act among renowned traditional gipsy orchestras.

“At Sziget we were approached by the director of an old Bulgarian gipsy orchestra who told us that we are doing something positive for gipsy and Roma music. In their country they are attacked on the street and discriminated against. We enjoy their respect because of the way we interact with their music. We had to ask permission for Kerta Mange, our tribute to gipsy singer Šaban Bajramović, who died. We would have had to ditch this track if his heirs felt that our version sucked. But they gave us the go-ahead. ”

Gregor is often considered to be an authentic Romani musician because of his presence and looks. Another factor that contributes to this is the fact that he expresses himself in a smattering of local gipsy languages. “I learned it using an English-Romani dictionary. I think it’s fascinating. I think that Serbian Romani is the most beautiful language for songs. It sounds like such a musical language. I also sing in Italian, French, English and Antwerp dialect. It’s boring and uninteresting to sing in one single language.”

“When you think about it, it’s quite logical for the Antwerp Gipsy-Ska Orkestra”, Mukti notes. “Our music is also an amalgam; the different languages help make our music completely different and unique.”

Gregor admits that his command of all these languages is far from perfect. “I know what I’m singing but speaking Romani is very difficult. It’s almost like a secret language and gipsies would prefer to keep it that way. I have them translate my lyrics and I check my pronunciation with the family members of our keyboard player, Suki. If he understands what I’m singing, then I’m satisfied.”

Even the most adamant purists tend to review their opinion when confronted with the whirlwind known as the Antwerp Gipsy-Ska Orkestra. And the eternal doubters are generally swayed by the group’s energetic approach. “We used to have red mohawks and play punk music. Punk and gipsy are the same really”, says Gregor. “The Antwerp Gipsy-Ska Orkestra’s attitude is one of ‘I don’t really give a damn’, with a bit of gipsy-punk thrown in for good measure. I Lumia Mo Kher contains distorted guitars and songs that are perfect for headbanging.”

“A la Truko, our adaptation of a song by Taraf de Haïdouks and Kočani Orkestar is a clash of horns, guitars and drum ‘n bass rhythms. To me that’s punk. You can pogo to it. No Disco Boy is a parody of commercial gipsy acts. There’s a lot that can be said about us, but we are definitely not wussies. We have a statement to make and we have attitude.”

That’s probably why the group quotes the punk veterans of Disorder in No Disco Boy (“Fuck your Nationality / Smash It To The Walls / Boundaries and barriers are the cause of all the wars”) as well as grindcore legend Napalm Death (“Multinational corporation / Genocide of the starving nations / That’s right we don’t want no more”). “These are significant references to our heroes from the late Eighties and early Nineties. Fuck it all!” Gregor explains. “But we have no problems performing a simple love song”, Mukti adds.

In order to coin the right sound for I Lumia Mo Kher the band decided to collaborate with internationally renowned sound engineer/producer Michael Zimmerling. “We are a very dynamic group. That is why we wanted to work with a producer who was capable of conveying this. We needed someone who could think out of the box. Michael Zimmerling worked as the sound engineer of Simply Red for several years and collaborated on albums by Depeche Mode, Sigue Sigue Sputnik, Nina Hagen and Einstürzende Neubauten. He came to Antwerp to record our album with modern techniques, and then went to London where he mixed our album with analogue equipment. A producer should be a sound creator with a vision. Zimmerling was the perfect man for our album. Thanks to his experience he understands how important the sound of the drums is. As a result our album has become even more explosive and danceable.”

And what title could have been better suited than I Lumia Mo Kher (The World Is My House). This is not an empty statement but a heartfelt message. “We are always on the road, either with the band or individually. At one point, we were all in different countries: Argentina, New Zealand, Italy… If globalization has a benefit then it has to be the fact that borders are becoming increasingly blurred. The world is literally our home, our house, like it is for gipsies.”

It also says a lot about the growing ambitions of the Antwerp Gipsy-Ska Orkestra. “We want to perform all over the world”, says Mukti. “And people from all over the world want us as is evident from the requests from festival organisers in Moldova, Russia, Mongolia, Turkey, Japan, Canada, Mexico… Unfortunately this is not always feasible from a logistical point of view. We hope to bridge thi gap with this album.”

Gregor and Mukti are old friends, they played together in Moss, a hardcore punk trio with Gregor screaming and Mukti demolishing the drum kit. At the same time Mukti played the guitar in Tachyon, at that time also a punk band (he was also in Belgian Asociality from 1998 untill 2008)… One thing led to another and Gregor became the singer of Tachyon. After Tachyon split up in 2003 these friends found each other again in AGSO.

Gregor leads the Ambrassband, a fanfare that grew out of the Antifare.
And he recently founded the Antwerp Gipsy DJ Collective (AG/DC) and Gregor Terror & the calypso gigolos.

Filip played bass with Le Trio Perdu. After their breakup, he formed the klezmer formation On Fidldikn Mamzer with the accordeonist. Among others Filip was an active member in the following bands Bobby’s Evil, Bacalhou (Fado), Tagsim (Arabo-Andalusisch) and Delicatessen (Free), Lais. These days you can catch him on shows of the Valerie Solanas, Andy and the Androids, Bazaar d’Oriënt & Jasper Huysentruyt.

Roel Poriau is part of Think of One and Harvey Quinnt, he’s active as a producer (of Maroccan music amongst others) and sometimes plays with Vetex & Panic Attack. 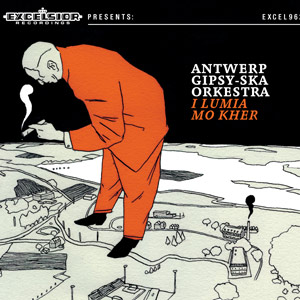